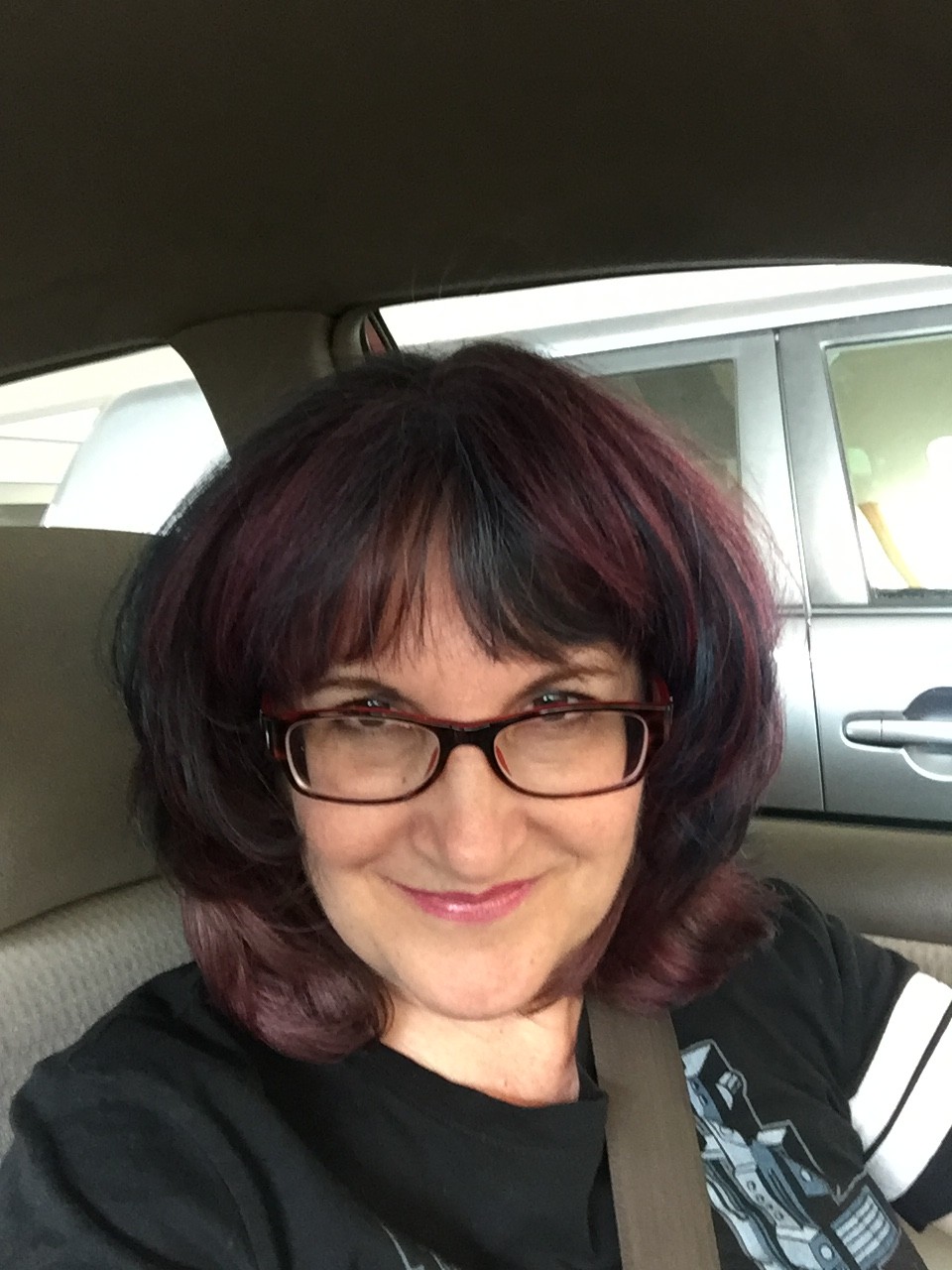 Color in the Hair!

Yes… yes, this post happened over a year ago, but I’m catching up!  Bee happy!

So Sex God turned to me one day and said, “Lets go to EDC!?”   (he recently did this to me again saying ‘lets go to Burning Man!’ which was a definite and resounding NO!)   My response was, “How about we try a baby rave first.”  I began to research and found several rave events but settled on Nocturnal in September.  It was nicely priced, set on grass and not cement (a negative in my books for events), had several stages which meant choices, and most importantly it had a camping option!  I got a cortisone shot for my heel spur to survive walking and dancing.  And for the first time I dyed my hair!  Two colors, a mix of red and blue. 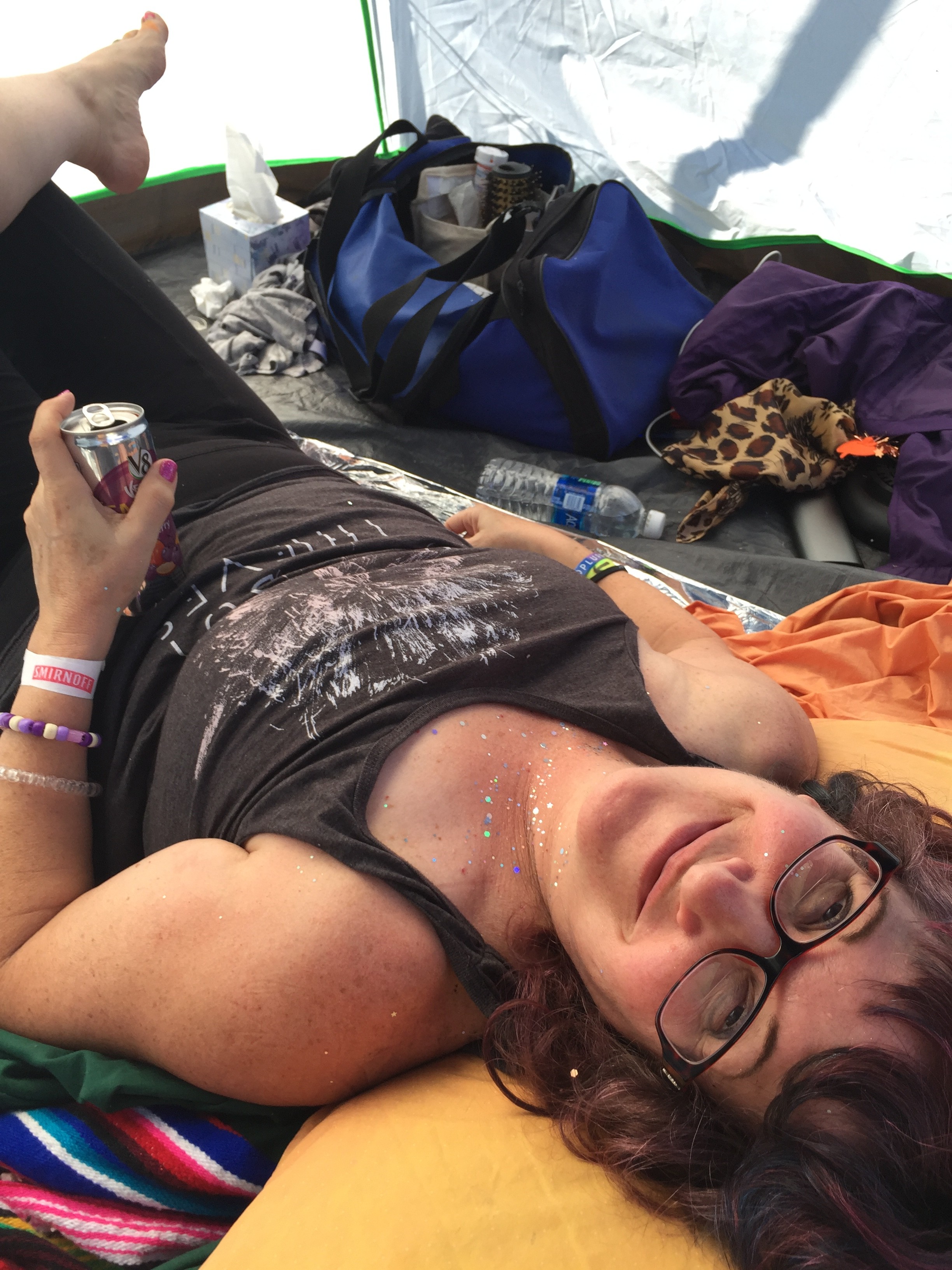 Relaxing in the tent

We didn’t spring for the exorbitantly priced car camping just the tent camping so it was a little different than Coachella.  Once we parked the car we had to drag ALL our stuff to the site.  The problem with this was 1. we’re doing this at night, 2. we foolishly thought we should do this in one trip, 3.  we had to also go through security!  (they confiscated ALL my glow sticks!!)  So by the time we got through all THAT we were so tired we picked the first spot we saw.  It quickly became apparent the 10×10 allotted space was rather small for our large tent/canopy AND that we’d forgot the blow up bed & sleeping bags! 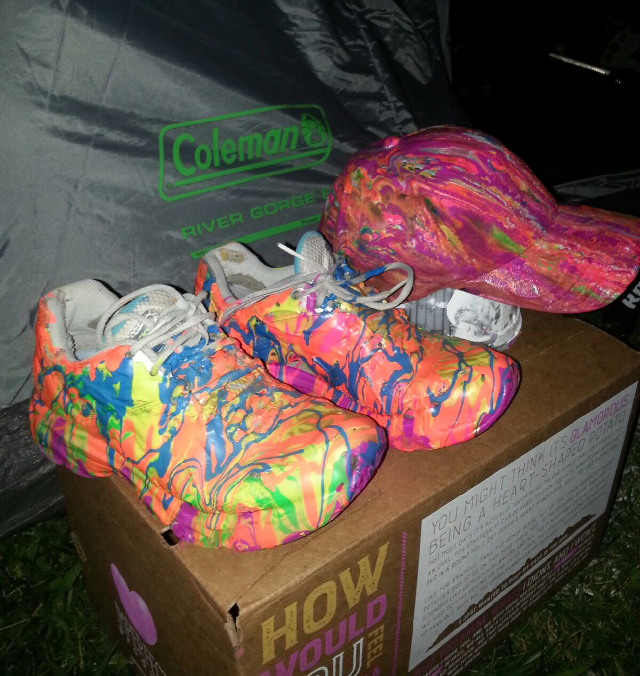 The first day doesn’t start until sunset, so there is lots of relaxation time and time to explore.  And time to let my Sex God painted shoes and hat to dry!  Nocturnal was held at the Glen Helen Regional Park and there’s a water slide plus a large wading pool!   From the camping to the event there was snacks sold and space with house music dancing which turned into a silent disco at midnight. 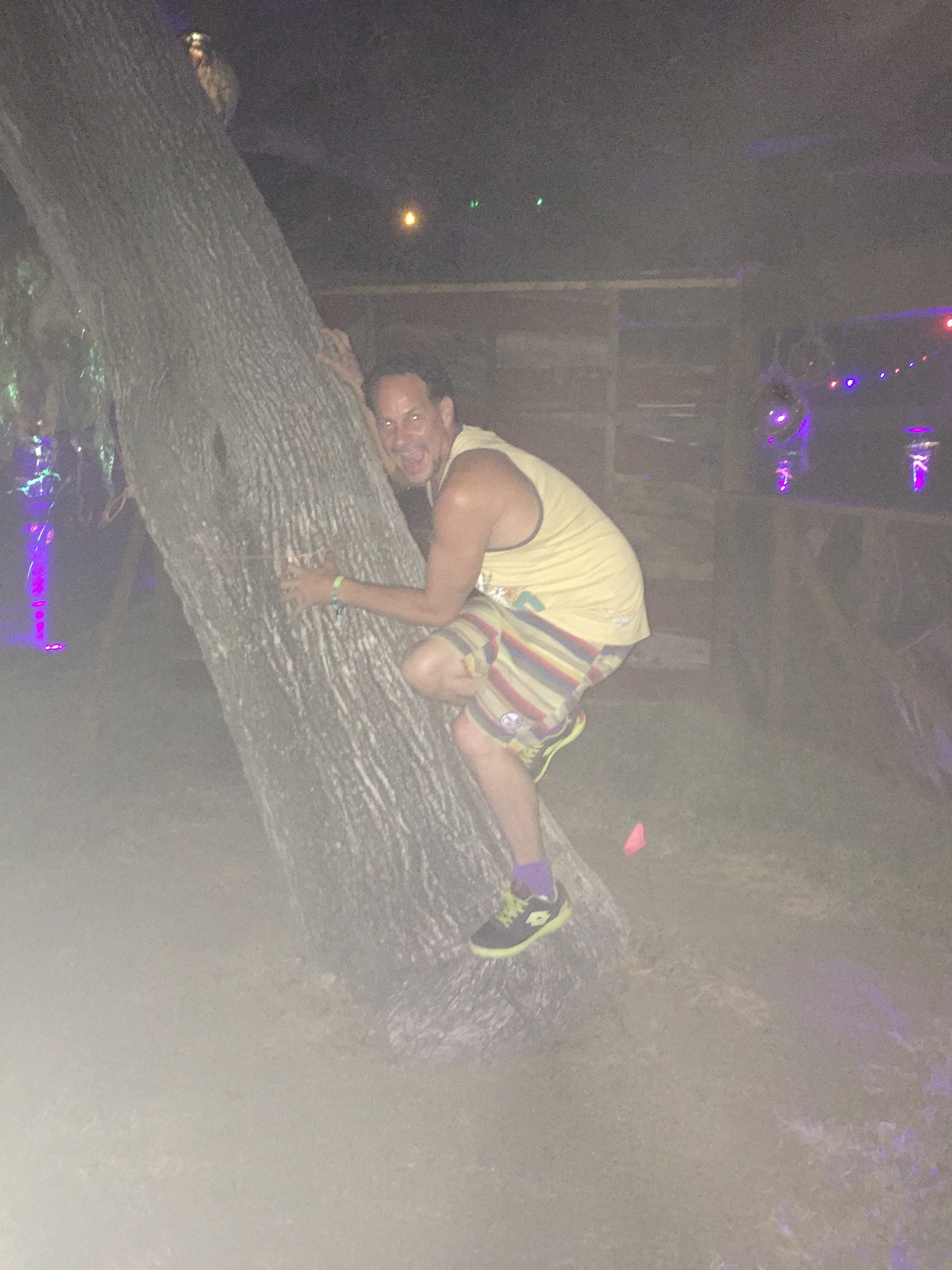 There was a long line to get into the event and they separated the lines into two sections, male and female.  Of course the girl lines went SLOW since we carry purses to inspect!  But the BONDING that was happening in line was wonderful.   When I told them I was over 50 it seemed to inspire the youngsters that they wouldn’t get boring in the future when they got old . lol…if they only knew how unique I am!   The kids quickly introduced me to P.L.U.R. which is Peace, Love, Unity & Respect, with all the corresponding hand motions and bracelet exchange!  Like I said, it was delightful! 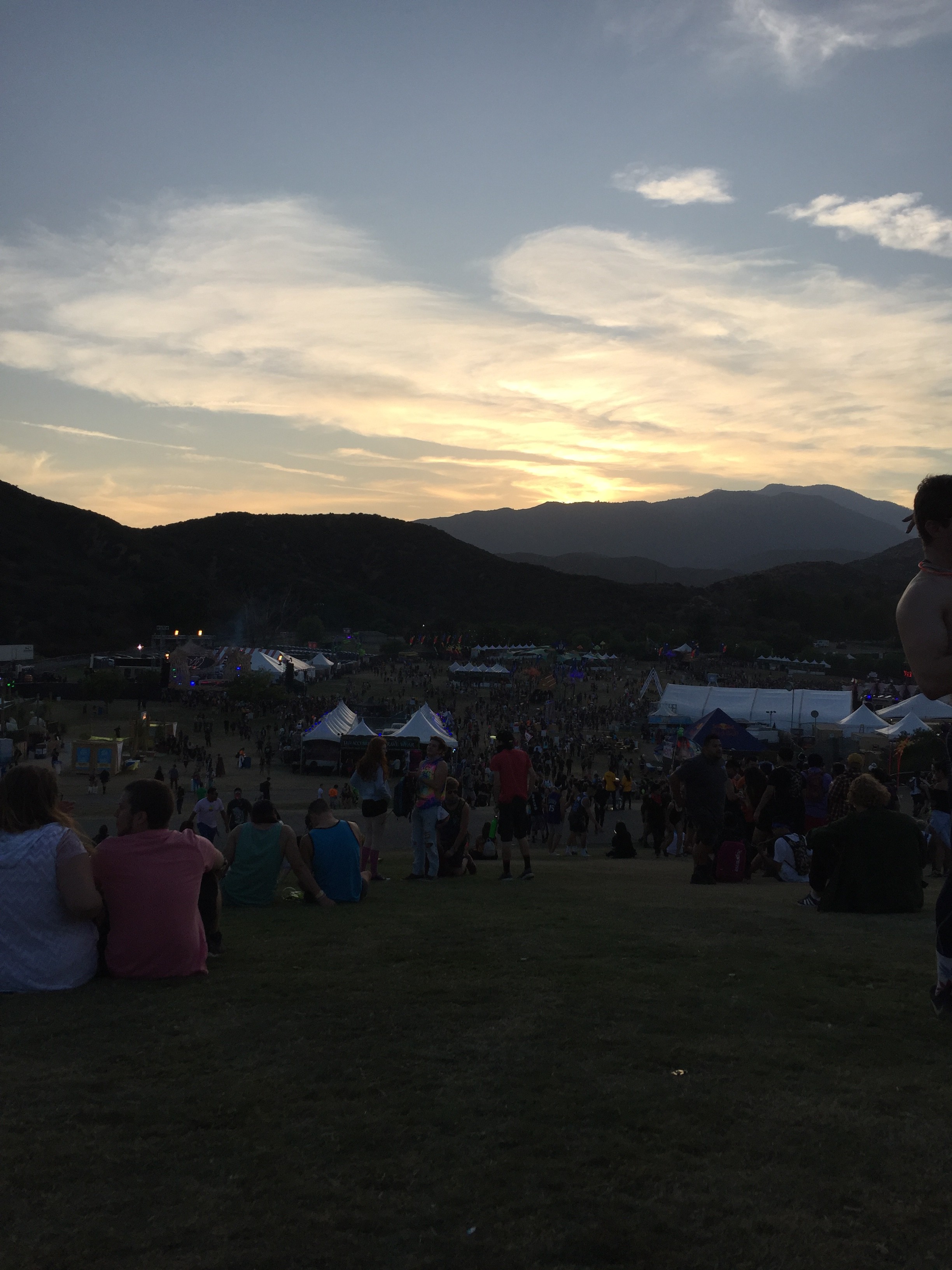 That wonderful acceptance and instant friendship was continued through the weekend!  I noticed that whenever Sex God left me comfortably sitting on the grass, happily watching everything to go off to get food or drink or the bathroom or do something I chose not to do… I was ALWAYS inexplicably joined by a single woman who would sit and chat.   And when he returned, I’d introduce her and after a minute she’d abruptly off and go.  At first I thought it was them who needed the company, but by day three when it also happened at the pool during the day I was realizing they thought I needed taken care of or protecting!  I’ve never experienced 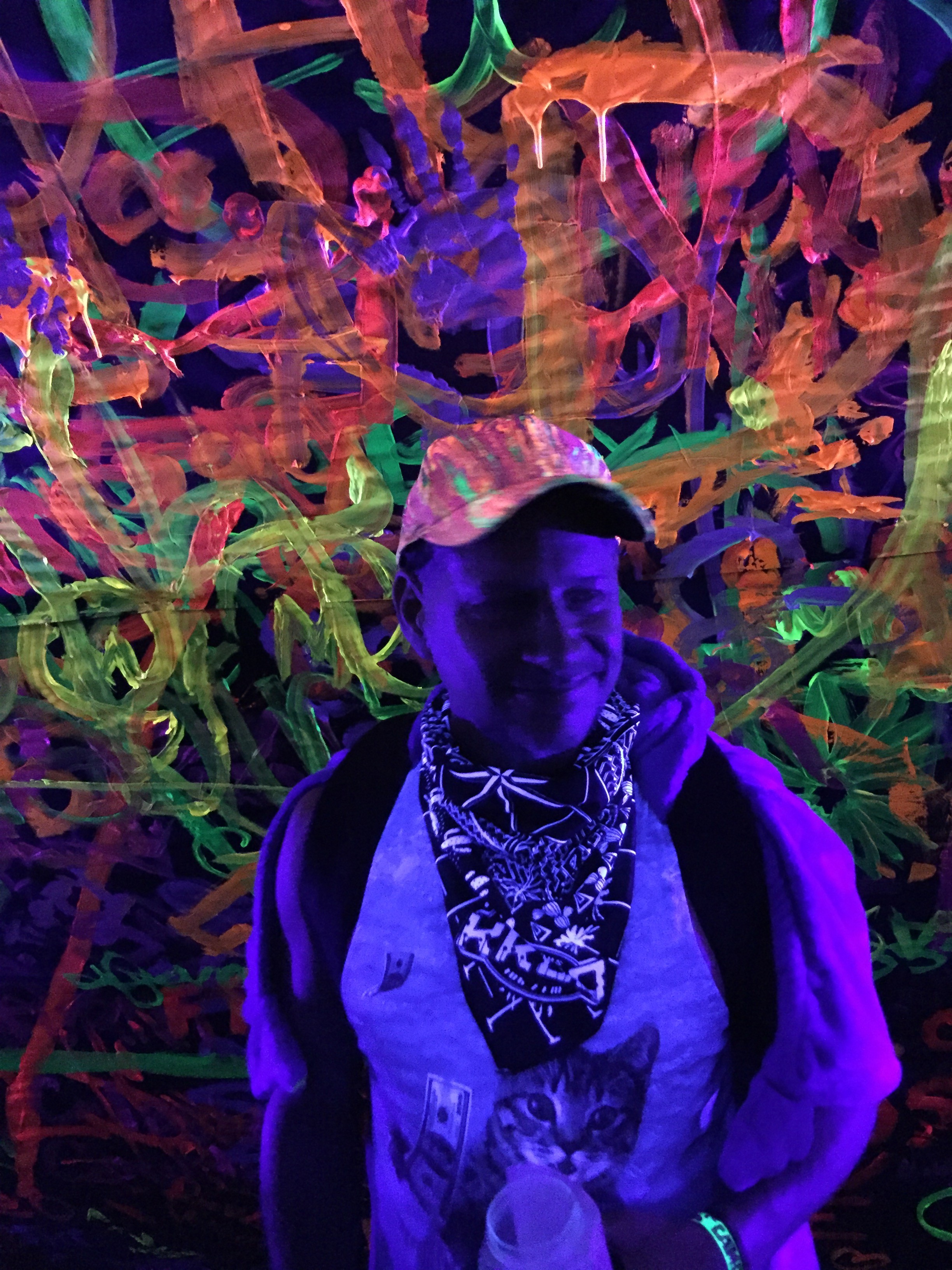 such female solidarity!  Say WHATEVER you want about this new generation and raves, but they are truly wonderful people who look after each other.

I’ll be honest, I really don’t remember “who we saw” as it was all more of a random wandering lead by our ears, and there was alcohol.  There was A LOT of walking.  A locker we purchased but NEVER used because Sex God never goes anywhere without his small backpack.  Probably the reason people often asked us if we were “carrying”  lol.  Since we knew none of the artists… and since my hard rap nephew was our sole suggestion source… we just let the music and the moments guide us each night. 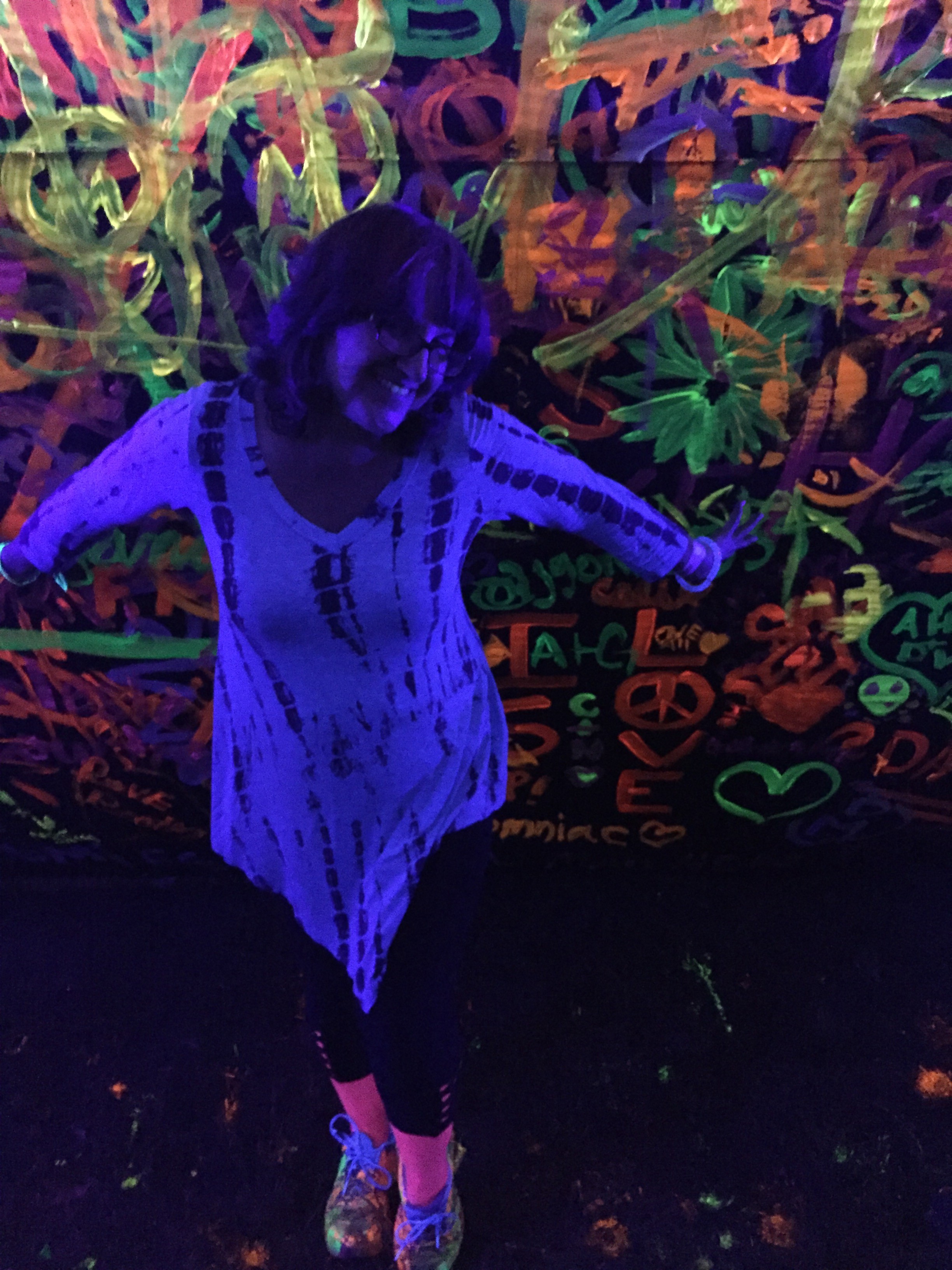 The drink choices weren’t that thrilling but it was more like Bottlerock than Coachella in that it didn’t have a special fenced off drinking area and just let you walk around with your drink.  It lived up to all our hopes!   Oh and did I mention there were costumes? hahaha!   The naked guy was great but the guy dancing in the disco outside of the venue in a Big Hero 6 costume was a lot of fun too! 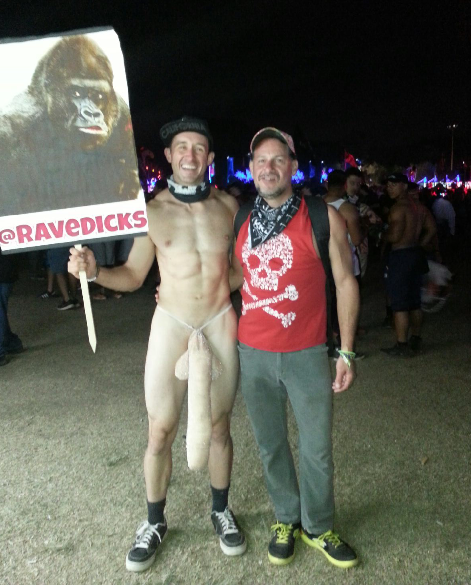