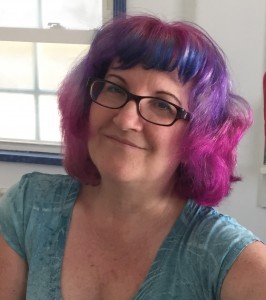 Self Dyed my Hair this year

Yes….another year, another Coachella.  (and only 2 months late on blogging it! I’m improving! ha)   Since we just purchased presale for 2020, it seemed appropriate to get this blog going. 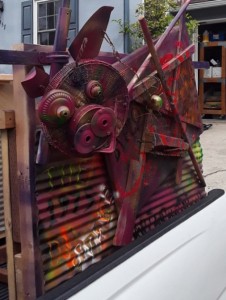 This year we had 6 people & 3 cars camping with us.   Nobody felt I needed to do any camp set up “rehearsal” as 4 of us learned enough from last year to realize a few facts.  1.  Only bring food for communal breakfasts.  Everyone can bring their own lunch/dinner/snacks if they so choose.  2. With three spots & six people it was obvious we were going to have three in one tent, three in another, and a communal space in between!  3. Cots are great but only IN TENTS!

So basically, I only had to make sure there were enough seats for people to gather and enough canopies and tents & sleeping blankets and tent sides. lol  Sex God only had to make sure his truck was running, would hold what we needed only in the bed and was decked out for Carpoolchella!  Luckily the other two cars with us, easily handled the luggage overflow lol.  We DID get pulled over for Carpoolchella and I did the pick from the bag.  Sadly, we only got $20 in food vouchers for  each of us.  Maybe next year we’ll get the grand prize of VIP for Life!

We all vowed to crash at my house the Wednesday night before so we could be up and on the road early Thursday.  Last year they didn’t open camping until 2am Friday  due to winds but told most people it wouldn’t be open until 10 am Friday, so we missed some choice camping spots.  This year we landed before noon and since we were with a group, we got moved off to a waiting area for group campers.  I must tell you, it was a sweet spot we got!  A bit far from the porta-potties but right next to a large structure that was a wonderful wind break!  Because the wind DID pick up by Friday night and Saturday.  But I get ahead of myself. 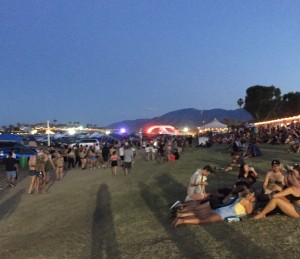 Sex God did his usual “I’m in charge of setting up” thing, but with 5 willing helpers he had it all up pretty fast.  Four of us were now old hands at Coachella but two of our group were newbies.  Ali (a friend from working at Target) had come with us one year to Bottlerock and didn’t really know my co-workers from IKEA, Martha and Monica.  So Ali crashed in our tent and Camille, Martha’s friend, crashed between their cots in another tent. Campsite all up we scampered off to see the campgrounds.   Most everything was the same as last year.   We’d managed to bring in ALL our alcohol and paraphernalia and proceeded to enjoy our pre-party day at Coachella!   We made a few plans for Friday and that was a serious as the day got! 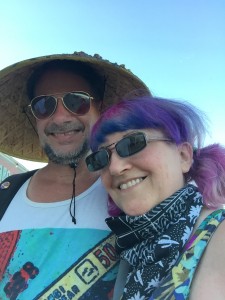 Id didn’t wear my Chinese hat for the photo but I did wear it all that 1st day.

Friday morning, Sex God cooked his usual scrambled egg with veggies and cheese.   Our group decided we needed a lot more ice and food and snacks so they took the town shuttle to get groceries.  While they did that Sex God and I went to see the show playing in the big structure next to us.  It was a movie done by Childish Gambino called Guava Island.  And it was wonderful.  PLEASE see it!  I think it’s playing on Amazon Prime.  It is many of Gambino’s best songs supporting a moving storyline.  Seeing that Friday really excited me to see him headline that night. 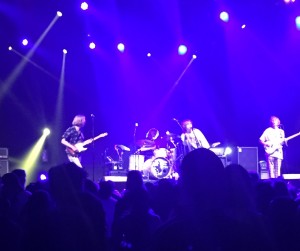 This year’s Coachella lineup wasn’t packed full of people I wanted to see.  Which actually wasn’t a bad thing!  It meant we had more leisure time, it meant we didn’t have to actually pick and choose who to miss.  Although the place opened at 11 am, we didn’t have anyone to see before 2pm which was Let’s Eat Grandma at the enclosed & AC’d Gobi tent (cute, young twin girls band).  I did stand in line for a looooong time trying to get into the merch tent but gave up to join my Sex God to enjoy the music.  Everyone else was smart enough to get on their phone and order their merch thru Postmates to be picked up.  I might try that next year if I decide I REALLY need merch lol.   We saw Rat Boy (adorable British punks) and Fisher, then relaxed & danced with Calypso Rose who brought out younger relatives to liven it up.  We wanted to see The Frights or Ella Mai but ended up popping back to the campsite to change into warmer clothes, get our drink on snack a bit. 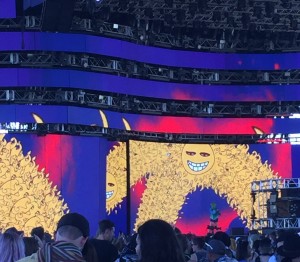 DJ graphics at their best!

Sex  God was hyped to see The 1975 but they started halfway through Black Pink’s set.  All the girls were jacked to see the BP, so we went with them to see what the fuss was about.  EVERYONE was there to see this K-pop group.  I lasted 2 songs before I realized this level of “POP” hit me like 90’s pop music.  To me, it was like watching 4 Korean Brittany Spears dancing on the stage.  If you’re not already familiar with the songs, they are incomprehensible.  If you’re not a Hello Kitty type of fan, it’s nauseating.  I turned to Sex God and happily said, “Shall we go to 1975 now!?    We stayed there for the rest of the night, seeing an AMAZING performance by Janelle Monae, popped over to check out DJ Snake (who was harshin my mello vibe and my feet were getting sore from standing) and ended the night with Childish Gambino.   Who Sex God felt killed it!  Considering he probably got bumped up to headliner when Kanye pulled out (Thank God!) he didn’t do a bad job, but after watching his brilliant movie, I felt let down by his show. 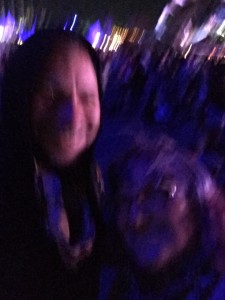 Blurry is exactly how we felt!

I was dog tired by the time we got back to the campsite.  Sex God told me I wouldn’t be able to sleep and I told him he was wrong.  Sadly, he was right!  The combination of ingested entertainment had me giggling off and on with Sex God all night.  Just when I thought I’d be able to drift off the wind would wake me with dreams of being beaten by giant ribbons or thoughts of “why are there birds trying to get in!”   We gave up trying to sleep by the early morning and just started our day! 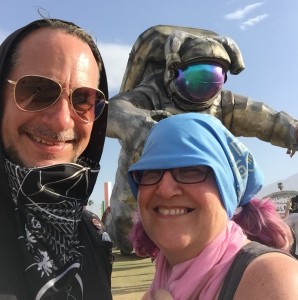 Day 2 so windy we skipped hats for bandanas

So my Saturday was veeeery low key!  Early on a guy came around telling everyone they should strip their canopies because of the wind.  So we did, and for some crazy reason our tent cover wasn’t put on (Sex God felt it made the tent too stuffy forgetting it also provided shade and privacy!) so lots of dirt and wind blew through our tent.   Despite that I did a lot of trying to nap that day.  No one else felt the need to go in before 4 so we had a hugely lazy day! 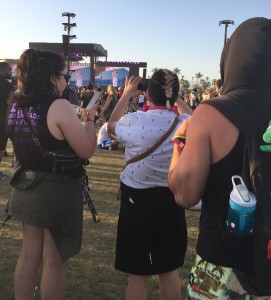 I think we got there in time to see The Interrupters.  I know we saw Bazzi.  Sex God was jazzed to see him but while I enjoy his music, he’s a bit dull live.  We saw Smino for a bit and then went over to see Billie Eilish.  I LOVE her music, but we got there late so didn’t find a good place to see her, and boy were my feet hurting.  She is Wonderful to WATCH live, but her soft voice doesn’t really play well at a festival.  We ended up moving off to enjoy Parcels before heading to the Main stage to see Tame Impala.   To be honest… I don’t think I knew ANY of their songs! lol

The wind wasn’t as bad as past Coachella’s where it’s blowing heavy grit off the desert, but it was gusting pretty well that night.  I tried to lie in my sleeping bag, but gave up after 5 minutes and dragged bag, pillow and myself into the backseat of the truck.  I knew I needed the quiet and warmth if I wasn’t going to be drained for the rest of my vacation!  It was perfect. lol 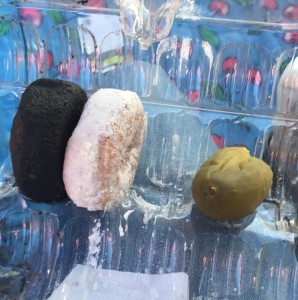 6 people snacking & eventually I get a pickle half in my donuts!

Sex God was up early thinking he’d get a good seat for the Kanye Easter Service.  Everyone else went in at a reasonable hour.  I chose that time to hit the showers!  It was a first time for me at these facilities.  Things I didn’t know…. There are no benches for your shit.  There are are hooks but best to bring a bag to hold ALL your clothes, clean and dirty!  There will be a line no matter when you go! 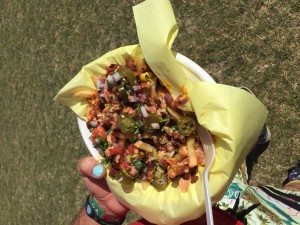 Sex God came back from the Kanye thing ALL upset.  He waited forever.  Kanye never sang just sat with family like some king.  It was hot, it was long (like over 3 hours) and my squirrel bf got fed up quick.  The rest of the group stayed a bit longer but they also felt it was pretty disappointing and pretentious.   We cooked up bacon with breakfast, making a mess in the process! lol and hung out.  We weren’t overly hot with the canopies stripped and lowered even in the sun due to the light breeze so it was a nice relaxing time. 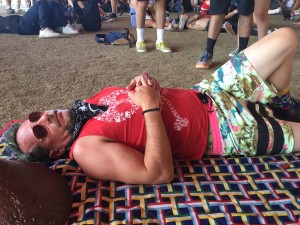 I’ll be honest…this is my favorite way to Coachella

We tried to get into the venue early enough to see Boy Pablo.  Then we stopped over to sleep through Dennis Lloyd waiting for Lizzo!  She was just amazing!!  Fantastic live and her voice was wonderful.  Everyone else went off to see Zedd and we popped over to see Hyukon.  I really liked them and the AC in the Gobi tent was nice!  We listened to about 20 minutes of Sofi Tucker and then scampered off to see Khalid.  Sex God loves Khalid, but I was a bit underwhelmed.  He was a bit boring to me.  Nice songs but they made me want to lie down and sleep. lol.  With Khalid done we walked over to catch some Chvrches before heading over to Ariana Grande.  I will say, I wasn’t impressed with her.  Her show looked an awful lot like a little girl emulating Beyonce… and she was no Beyonce! 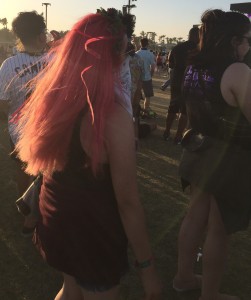 We ended Sunday with Sex God joining me sleeping in the truck, me in the back and him in the passenger front seat.  Ali had also abandoned our tent to cram in with the other girls!   Monday had us a leisurely morning before sorting through the rest of the food, emptying water filled coolers and taking down the campsite.

This year’s Coachella vacation  was pretty perfect as Ali was the same age as my other friends and she rounded them out into four.  They hung mostly together and my love and I got to enjoy a festival alone.  And when we wanted to hang with friends we did.  I’m looking forward to next year! 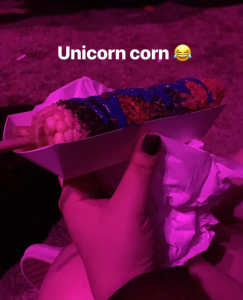 Sex God delighted everyone by occasionally disappearing & showing up with food!